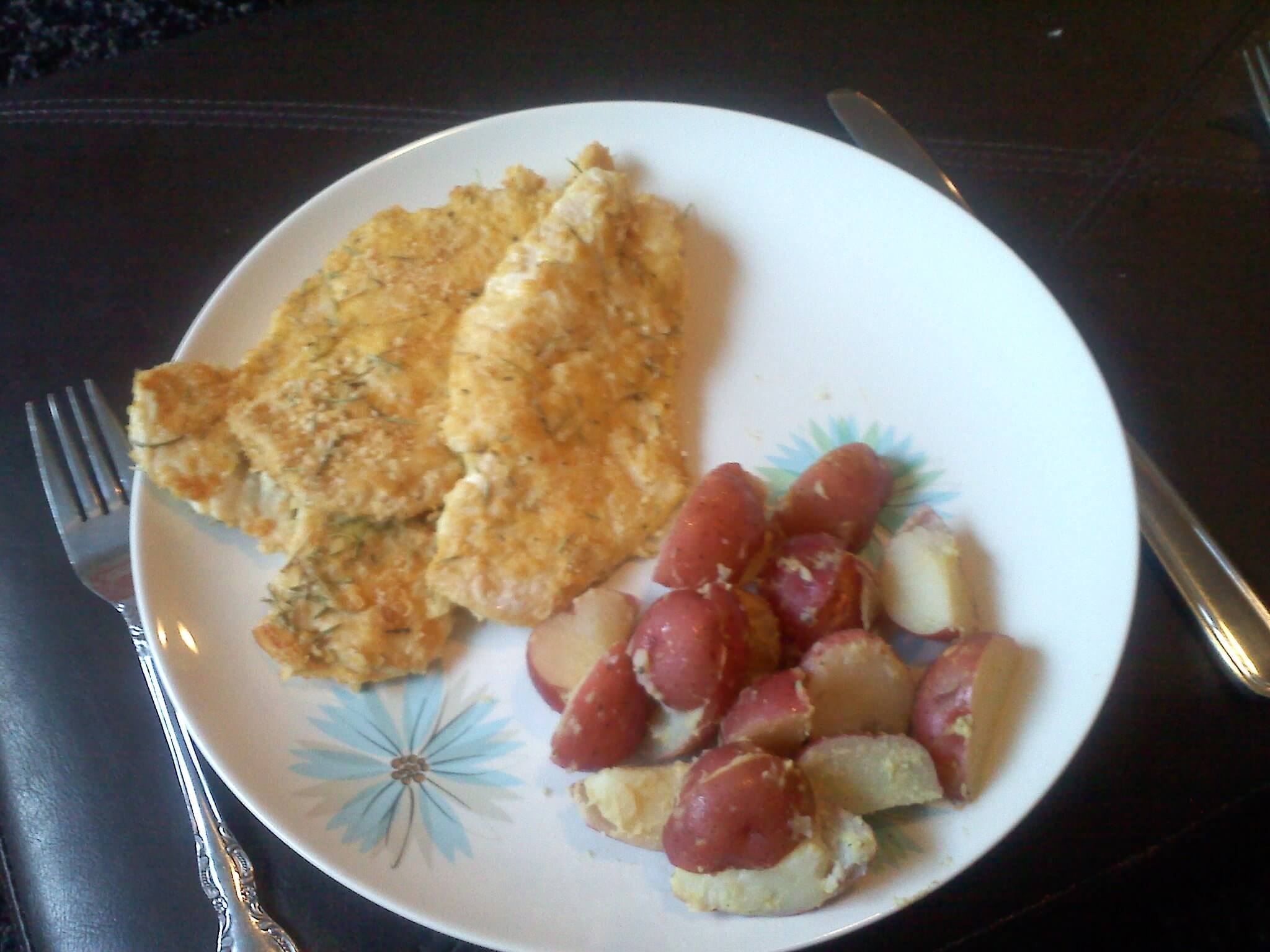 This meal is not groundbreaking, it’s not difficult, and it’s not really anything new. But it feels complete, it took all of 10 minutes to prepare and 30 minutes to cook, and it was delicious. Just add greenery. The asparagus we ate alongside this took forever to cook so we ate it as a kind of dessert. Oh, who am I kidding, we ate cookies for dessert and I put the asparagus in the fridge.

My reason for posting this recipe is the potato salad. Back when I was unemployed I was doing some recipe testing for a meal delivery website and more often than not, the recipes were mediocre and tasted like they were missing something. One in particular was a mustard potato salad that was SO bland and I couldn’t figure out why. Then I found a recipe in Real Simple magazine for a mustard potato salad that had a splash of red wine vinegar… and there was the missing ingredient. I once read on a blog, “if your dish is missing something, it’s probably an acid.” And in this case, it was true. You learn something everyday, kids.

Put egg in shallow dish and scramble well. In another shallow dish, combine parmesan, bread crumbs, rosemary, salt and pepper. Dredge cutlets in egg and then bread crumb mixture. Place on a greased baking sheet and bake for 10 – 12 minutes or until chicken is cooked through and breading is browned.

Meanwhile, boil water in a large pot. Add potatoes and cook for approximately 16 – 18 minutes or until potatoes can be easily pierced with a fork. Drain potatoes and return to pot. Add mustard, red wine vinegar, oil, and a pinch of salt and pepper. Stir to combine. Serve warm alongside chicken and a green vegetable.

When I was a single girl, living in a single world, I did my grocery shopping whenever I needed to. If I felt like cooking I’d pick up necessities on my way home from work because if I did weekly shopping then things went to waste (you know, because of those nights when you’re like, hmm this chocolate cake and red wine looks like dinner to me). But now that I am living with a S.O. (that’s significant other for you laypeople) we do our grocery shopping once a week. Not only does that mean that I have to plan nightly meals for a whole week, but it means that when single-Lauren would’ve eaten red wine and cake because she lacked the energy to grocery shop, S.O.’ed-Lauren tries to make due with what’s in the cupboard.

This is a sauce that you can put on pasta, pour over roasted vegetables, or even use as a pizza sauce beneath toppings like prosciutto or zucchini, and it’s a sauce that can be made with things you probably already have in your cupboard. As long as you’re a nice Italian girl, that is.

In a small sauce pan over low heat, melt the butter. Add garlic and saute for 2 – 3 minutes or until aromatic. Add the flour and stir into a paste. Add milk and cream and cook for around 5 – 6 minutes, until the mixture starts to thicken. Add the parmesan cheese and the basil and cook until desired thickness, around 5 – 6 more minutes. Toss with pasta and serve.

Penne with Mushrooms and Pancetta

I know, this is not the most appetizing picture ever. But it’s better then nothing!

It’s a blessing and a curse, guys. I am phenomenal at making basic comfort foods. I know, I know. Humble, too.

You might be thinking, “How in the world is this a curse?” Because in my house, that’s all I ever get asked to make. The below dish is a perfect example. It’s not groundbreaking cuisine here, folks. It’s just a different sauce. But after I made it The BF said, “You gotta make more stuff like THIS!” Ah… more cheesy pasta. Noted.

On the menu:
Penne with mushrooms and pancetta

In a large sauce pan, combine the beef broth and the wine over medium/high heat. Let cook for 18 – 20 minutes until the liquid is reduced to one cup.

In the meantime, heat 1 Tbsp olive oil over medium heat in a LARGE pot (the entire pound of pasta will eventually go into this pot so keep that in mind when choosing a size). Add mushrooms and season with a bit of salt and pepper. Cook until softened, around 6 – 8 minutes. Transfer mushrooms to a plate.

[AT THIS TIME: start cooking your penne! Just remember to cook until JUST al dente, and reserve half a cup of the pasta water for later in the recipe]

Add pancetta to the large pot that your mushrooms were in and saute until the pancetta is crispy and brown, around 10 – 12 minutes. Drain off excess fat. Add wine reduction, butter, and herbs to the pot. Simmer until liquid thickens slightly, around 5 minutes. Stir in mushrooms.

Add cooked pasta and 1/2 cup of the parmesan cheese to the mushroom mixture. Cook over medium/high heat until the sauce really thickens and coats the pasta, about 7 – 9 minutes, adding a bit of pasta water little by little if the sauce is dry. Plate pasta and top with remaining cheese.

Sometimes you find yourself with too much squash. Don’t you hate that? It’s what some might call a “First World Problem.” Along the same lines as, “Someone scratched my Porsche in the parking lot of Nobu” and “The Pellegrino is flat.” Well, kids, I am really good at turning lemons into lemonade. Seriously, it’s just juice, sugar, and water… it’s not hard. I’m also really good at turning a surplus of something into a delicious dish! 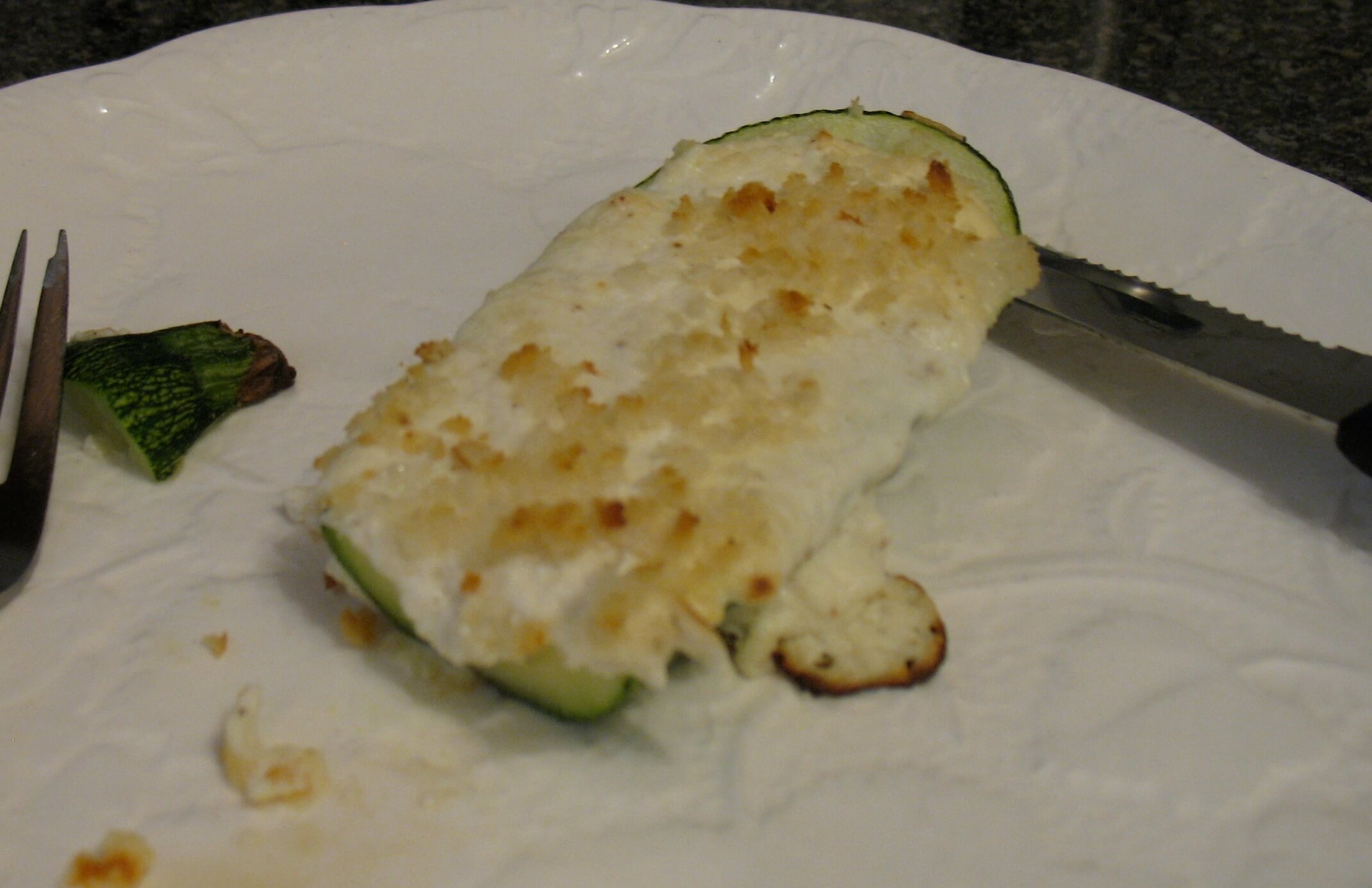 On the menu:
Zucchini (or Mexican squash!) with Ricotta
Serves 2

Preheat oven to 450 degrees. Slice squash in half and scrape out seeds with a spoon. Lay skin side down on a baking dish. Mix together cheeses, lemon juice, and salt and pepper. Fill each half of the squash with ricotta mixture and top with breadcrumbs. Bake for 20 minutes.

This dish is perfect as a side dish, appetizer, or snack. And it’s as easy as pie. I literally whipped this together in 5 minutes before I ran out to get my laundry. And then I ate it alongside half a pizza. Don’t judge. K thanks.