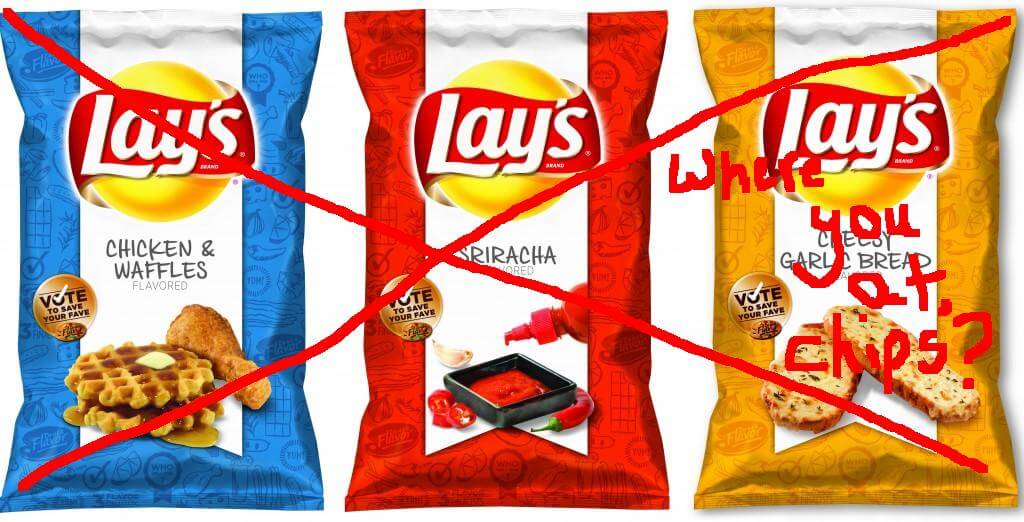 I have a food gripe and this being my own personal food blog, what better place to air my grievances? I feel like someone just answered, “In your head, you jerk” but I don’t care. Read no further if you don’t like complaints.

Let me start by saying that in my day job, I work in marketing and I’ve worked in the field for six years now at a bevy of companies. I know what it means to come up with a campaign and push it so that your products sell. So when Lay’s announced it would be running a contest to name its newest flavor of potato chip, I envisioned a group of marketing executives sitting around a big conference table in an office somewhere throwing around ideas and running with this one. They hired a couple celebs (a chef for legitimacy and an actress for flair), filmed some commercials, and spent God-only-knows-how-much money to promote it. They chose three flavors (Sriracha, chicken and waffles, and cheesy garlic bread) and produced the chips for people to try. They’re now conducting another vote and the winning flavor will be added to their regular lineup of chips.

So who of you out there has tasted these chips? Because I cannot find them EHHH-NEEEE-WHERRRE. Not only can I not find them anywhere in New York City (Hey Lay’s, not sure if you know this, but there are a LOT of people who like food in this city) but my mom can’t find them in Rochester and according to the Lay’s Facebook page, people can’t find them in New Hampshire, South Carolina, Florida, Georgia, or Kansas. From the people who have tasted them (every high profile food writer on the internet, apparently) the chips are “meh.” They taste kind of fake, the flavors are weird, and no one wants to eat a whole bag. But gosh, wouldn’t it be nice if we laymen (no pun intended) could try them out for ourselves?

I’m sure some of you out there are thinking, “Duh Lauren, if the chips are limited in quantity then that makes them more in demand and LOOK you’re even writing a blog post about the fact that you can’t get them!” But let me ask you this, dear reader: what good is publicity for a product you CAN’T BUY? Sure, there’s buzz for Lay’s. Their Facebook impressions have probably gone up since this campaign started. But most of the “buzz” is outrage at the poor marketing campaign. Angry customers are boycotting Lay’s because it’s kind of like that hot girl who teases you into thinking you can date her and then cut to three months from now when she’s still playing hard to get and you’re like, “You know what, girl, you are just. not. worth it. Now I’ll date your less-popular-but-way-more-reliable friend because instead of making me run all over town for the possibility of a taste she’ll hang with me on my couch watching television every night of the week.” (Disclaimer: I do not eat potato chips every night.)

Guys, I’m annoyed. I just wanted to try those terrible chips and write about them. I wanted to crumble them up and coat some chicken cutlets with them. I wanted to compare the Sriracha flavored Lay’s with some homemade potato chips I made with real Sriracha. But now I can’t. And I’m kinda ticked.

If you happen to stumble upon this elusive snack, please let me know. I want to hear what you think about it. Meanwhile I’ll be at home eating Cape Cod. They just came out with a flavor called “Feta and Rosemary” and that sounds just fine to me.

My lovely friend Molly has this really brilliant feature on her blog where she includes a song she’d play while making the recipe she’s blogging about. I love it. I think it’s genius. And who doesn’t listen to music while they cook? So today you can scroll down and listen to the same song I played whilst making this delicious dish.

My mom calls this one “dad’s famous onion dip” because apparently when he was a bachelor he used to bring it to parties and everyone would RAVE and it was his little secret that it is literally the easiest dish in the world to create. But I had a thought. I love all the ingredients. So I will turn it into a delicious sandwich. Try it both ways, kids! You will not be disappointed. 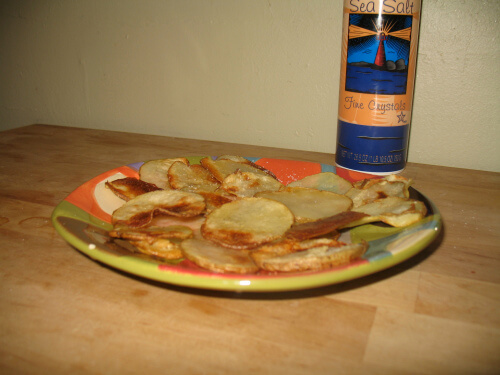 2 cups mayonnaise
2 cups yellow onion, diced
2 cups swiss cheese, diced (why doesn’t anyone ever shred swiss cheese? why don’t they sell it pre-shredded in the grocery store alongside the cheddar and the mozzarella? the world may never know.)

Throw ingredients in a big bowl. Stir. Microwave for 10 – 15 minutes or until melted into one beautiful mixture. Stir. Serve with Ritz. Be as popular as Chuck.

To make the sandwich: thinly slice 1/4 of a yellow onion and sautee with butter until the onions are gently browned. Build a sandwich with turkey, swiss cheese, a healthy slathering of mayo, and the sauteed onions. Grill over medium heat until the bread is browned and cheese is melted.

On the menu:
Homemade potato chips

Preheat oven to 400 degrees. Slice potatoes into 1/8 inch thick slices, using a mandolin or a sharp knife. Toss with oil. Lay in a single layer on a baking sheet. Bake for 15 minutes or until the slices are dark brown, just short of burnt. Immediately after removing from the oven, toss with salt and pepper or seasoning of your choice.

*Be creative! How delicious does shredded parmesan and parsley sound on these? Or a little cayenne pepper? Or just a healthy dose of freshly cracked black pepper? Or you could get REALLY crazy and sprinkle a little sugar and sea salt on them. The possibilities are endless. And if you mess up… well, you just wasted a couple potatoes. Call me. I’ll send you the $.65.